BioBlitz around the Baltic Sea is a first citizen science mini-project within the Baltic Sea Project of UNESCO ASPnet that includes all the students and teachers from 9 countries, also their parents and friend, to discover the nature around them simultaneusly during one day, 27th of August 2020, using a smartphone app called iNaturalist and a nature watch method called "bioblitz".

Other iNaturalist original video tutorials can be found from here: https://www.inaturalist.org/pages/video+tutorials

There will be prizes that will be given out for participants by random fortuna wheel.

The Baltic Sea Day, launched by the John Nurminen Foundation, which is an annual day of celebration in honour of the sea. The objective of the day is to encourage people to enjoy the unique sea that belongs to us all, and to take concrete actions that benefit the sea. In addition to the celebrations, the purpose of the Baltic Sea Day is to provide information on the versatile nature, culture, and history of the Sea.

The Baltic Sea Day is celebrated every year on the last Thursday in August with various rallies and events. There are many ways for you to participate, so do join in! More info about the Baltic Sea Day: https://itameripaiva.fi/en/

The Baltic Sea Project is an international network among UNESCO ASPnet schools for a better environment in the Baltic catchment area. Today, over 172 schools are active in the BSP. Most are secondary schools situated on the Baltic coast, but the number of inland schools from the entire catchment area is increasing. In many schools, the BSP has been organized as a joint effort including many subjects. There are many international events (camps, conferences and quizes) to come and learn about the sea. Read about our past activities from here: http://www.b-s-p.org/home/

Citizen science (CS; also known as community science, crowd science, crowd-sourced science, civic science, volunteer monitoring, or online citizen science) is scientific research conducted, in whole or in part, by amateur (or nonprofessional) scientists. Citizen science is sometimes described as "public participation in scientific research," participatory monitoring, and participatory action research whose outcomes are often advancements in scientific research, as well as an increase in the public's understanding of science. Based on Alexa rankings iNaturalist is currently the most popular citizen science website followed by eBird and then Zooniverse in second and third place respectively.
All data that is collected during the 27th of August will be sent to the Global Biodiversity Information Facility (GBIF) where all scientists all over the world can study about all lifeforms on Earth (https://www.gbif.org).
Don't forget to charge your phone, and go outside on 27th of August! 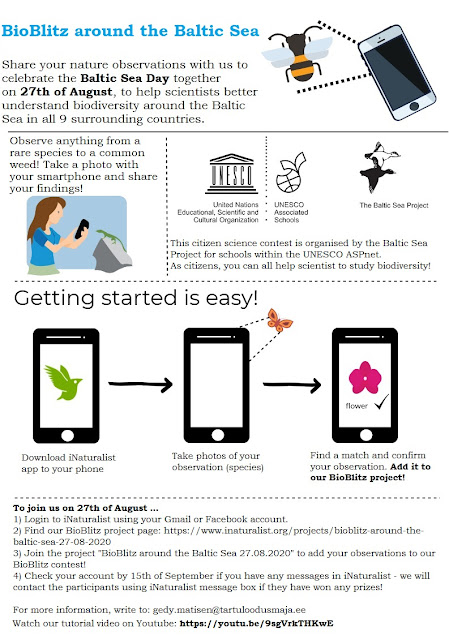